While their technology can’t part an ocean, it can radically reduce how much water and power farmers use, a potential boon for Pinal County and other regions facing reduced access to water.

The company’s innovations include a polymer that lets in light while reflecting heat, salt-water-tolerant tomatoes, more efficient climate controls, and an advanced monitoring and information system.

For Red Sea Farms co-founder and CEO Ryan Lefers, bringing all this from the Arabian Desert to the Sonoran just makes sense.

“My main goal in moving here was to start the globalization of our technologies,” Lefers explained. “We saw the US as the logical next step for that to go global, as well as serving the US market and the Mexican market, so we're looking to continue to ramp up our team here.” 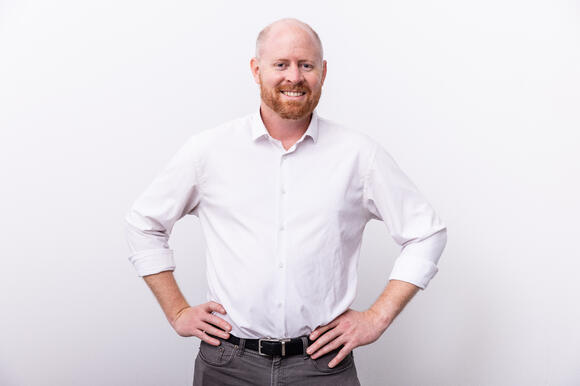 Before Lefers was a CEO in the Arabian Peninsula, he lived on a dairy and small grain farm in the Midwest. There, his family scratched out a living from the soil, even when the sky wasn’t agreeable.

“I grew up on a farm in South Dakota, so agriculture is in my blood,” Lefers said. “I remember watching the storm clouds come in during the summer with my father and, you know, our livelihood was dependent on rain, or the lack thereof.”

Lefers earned a master’s degree in agricultural engineering from South Dakota State University in 2006. He spent the next several years focused on protecting and purifying water as an environmental engineer in Minnesota.

Then, the Midwest farm boy made a somewhat bigger move for the next phase of his career, relocating to Saudi Arabia to study at King Abdullah University of Science and Technology. Lefers earned a Ph.D. in environmental science and engineering. He also met his future business partners.

The genesis of Red Sea Farms

Lefers describes his Red Sea Farms co-founder and the company’s CSO, Mark Tester, as the Indiana Jones of plant science. Tester is also a professor at KAUST.

Originally from Australia, Tester and the American Lefers struck up a friendship in the desert kingdom. They witnessed its problems with food production firsthand.

Saudi Arabia imports 70% of its food security needs, according to a 2020 reportfrom the US Department of Agriculture.

In response to the growing demand for food in that country and worldwide, Lefers and Tester joined together to form Red Sea Farms in 2018.

At that same time, a material science and engineering professor at KAUST, Derya Baran, started her own company working in a similar space. She decided to join forces with Lefers and Tester two years ago. At the merger's completion, Baran became the company’s chief engineer and third co-founder.

Breeding vegetable varieties that are drought, heat, and salt-water tolerant is just one of Red Sea Farms' potentially transformative innovations. Many of its other advances involve radically rethinking the purpose and function of greenhouses.

For instance, the company developed a polymer that can dramatically reduce energy use by only allowing certain light waves through windows, like a bouncer in front of a club.

“When you're outside, and you feel the radiation from the sun, and it's hot, you're feeling that 50% that isn't light or ultraviolet,” Lefers said. “That's the spectrum of the sunlight that we're trying to block from entering the greenhouse, which is a giant solar oven.”

The polymer can be incorporated into new structures or painted onto existing ones. By passively blocking heat, the substance reduces the need for cooling while lowering water use. Additionally, the polymer can absorb and convert heat into usable electricity, allowing windows to pull double duty as solar panels.

Red Sea Farms also developed new climate control systems that reduce greenhouse energy use and improve crop quality. By combining a thermal battery with a desiccant, the system regulates humidity, purifies the air, and quickly turns down the heat.

“Really what we're targeting is a rapid temperature drop in the greenhouse or whatever you’re growing in during that hour after sunset,” Lefers explained. “It helps your crop to both live longer, but also to produce more and higher quality.”

Altogether, the company’s suite of technologies offers new solutions to the challenges of desert farming.

Growing in Arizona and around the world

Though Red Sea Farms first took root in Saudi Arabia, it has since branched out into the United Arab Emirates, Egypt, the UK, Portugal, South Africa, and the US via Arizona.

While the company's footprint stateside is still small, it's focused on building future research and growth capacity. It joined the University of Arizona Center for Innovation at Biosphere 2 earlier this year. Plans to set up demonstrations at the facility in Oracle are underway.

Red Sea Farms is also working with U of A’s College of Agriculture and Life Sciences’ Controlled Environment Agriculture Center to evaluate the company’s technology by integrating it into the existing facilities at the University.

Scientists use Biosphere 2 to ‘sniff out’ drought-stressed rainforest

How a forest's smell could help scientists sniff out drought stress